Shinwa is one of the goddesses of Subeta. She has been called by many the Goddess of Light and her

greatest rival is Maleria who she was told to keep an eye on by the High Circle. Despite her powers, the goddess cannot leave her temple in the Sacred Lands. Both Shinwa and Maleria came from a planet called Selenis on which she was leader of the rebel army.

Shinwa is said to be very vain and always has to stop and look into any mirror or reflective she sees. She has a fondness for the color pink, with almost all the items in her temple being pink.

Shinwa also made an appearance during the Omen Islands Plot. She expressed regret at not being able to save Amy who was killed just because she looked similar to herself. Merana is also enemies with Shinwa due to the fact that Shinwa exiled the sea witch to the Omen Islands to contain her power.

Shinwa can be visited by users, she is the quest grantor for Shinwas Quests 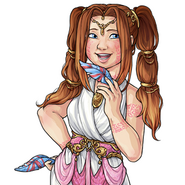 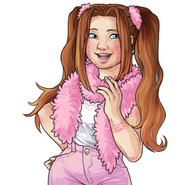