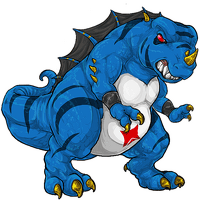 The Mortiking is a dinosaur pet.

The Mortiking is a blue theropod resembling a tyrannosaur. It has dark blue stripes on its tail and hind legs, and wide black bands around its much smaller, two-clawed arms. A black dorsal fin with spiky vanes runs down its back. Its claws, two small horns on its nose and two more on the back of its head, and three spikes on each arm are golden yellow. Its eyes are red, and there is a diamond-shaped red patch on its rounded white belly.

It is available in 22 colors, including Reborn, Bloodred and Glacier.