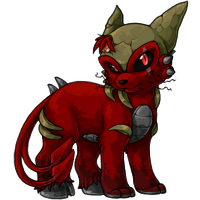 The Darkonite is a feline pet.

The Darkonite (dar-KO-nite) is a crimson mutant feline with a tail that splits halfway down its length and ends in two spade-shaped tips. Its feet are stained wine red; while its front feet are paws, its hind feet are gray cloven hooves. A portion of the tarnished bronze helmet which protects its head is cracked, exposing a section of its brain. Its chest and underbelly are covered in gray scutes; gray spikes protrude from its jaw and rump; and it has bronze ridges on its shoulders and thighs. Its vermilion eyes have slit pupils and black sclerae.